Every time that my 88-year-old grandma walks into my studio in Iowa the first thing out of her mouth is always, “So you’re still painting black men, huh?” 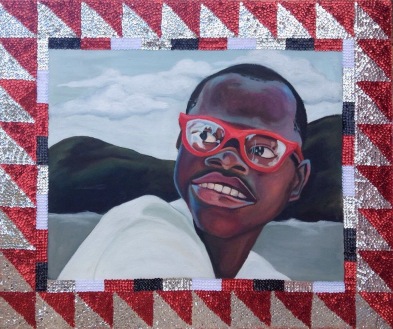 She knows that I live in a place where everybody except me is black, so the images that I paint reflect the world that I see every day. But the reality of where I create most of my art and where I display and sell most of my art is very different. And to grandma that doesn’t make sense. But to me, it wouldn’t make sense to paint anything else. Beyond the color of their skin and the texture of their hair, the people that I paint most effectively represent who I am as a human and as an artist. I would hope that other viewers of the work, no matter what their skin color is, would also be able to find something about the subjects of my paintings that reflects who they are. But the truth is that a lot of people will still see black men painted by a white man and not much more.

So, this week when I heard the news of Rachel Dolezal, a leader in the NAACP who had been living as a black woman for years despite having been born to white parents with curly blonde hair and blue eyes, I started to listen closely. It’s a strange story that has people of all races confused, some angered, others amused. And as I read through the news stories of her life, and all that she went through to convince people that she was black, I was a bit confused myself. But then I read a story that pointed out that in college as an art student she once submitted a portfolio of work that was all portraits of black people. This little bit of information, which might get lost on most readers, was used as proof of her delusion even back then. That’s when I started to see her side of the story a bit clearer. When someone makes the claim that “because she was a white person painting black people” clearly she’s not right in the head, then I start to get a little defensive. Clearly the debate is not actually about her artwork but about how she used her ability to pass as a black woman as a way to become a leader in an organization that represents the interests of African Americans. But all of these pieces of her past are used to suggest that she has been “appropriating,” “fetishizing,” and “exploiting” a culture that does not belong to her for years. 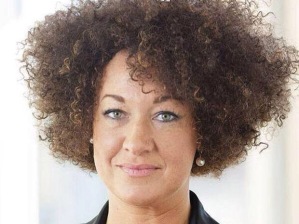 Now this is where I think we have to be very careful of labeling any white person who feels more naturally a part of black culture with these labels. In the dialog surrounding Dolezal, the word “transracial” has come up, mostly to be discredited completely by the media as absolute bullhunky. And this is where I start to feel myself more personally pulled into Dolezal’s story. Because although I would never try to alter my appearance or claim that I was actually black, in almost every aspect of my life, I identify much more strongly with black culture than the culture that I was born into as a white man. My favorite visual artists, writers, and musicians are all black. I listen to hip hop music and watch films by black people, filled with black people. I feel most fully myself when I am surrounded by black people. All of my closest friends are black. Most of the people I’ve ever dated are black. I now live in the world’s first black republic. I speak a very black language. My white friends back home frequently comment on how much happier and more alive I seem when I am here living the life of a black Haitian. And yet my skin is very white. You can ask the sunburn that is currently making my forehead peel. White.

Still, to my grandma’s chagrin, I continue to make paintings filled with black men. And the only thing keeping my artwork from being labeled appropriative, fetishizing, and exploiting, is the fact that the subjects are Haitian and not African American. So instead of being considered cultural appropriation, they can be called humanitarian activism or cross cultural awareness. Because even when compared to black Americans, black Haitians are still considered less than, in need of help, deserving of pity. So when I live a life entirely defined by black Haitian culture and become a leader in an organization working on behalf of black Haitians and make art of black Haitians, I am considered to be helping and advocating and doing good work. But when Rachel Dolezal lives a life entirely defined by African American culture and becomes a leader in an African American culture, and makes art of African Americans, she is considered to be harming and offending and reversing progress.

To me it’s a very strange sort of evidence of modern day imperialism and the White/Western Savior Complex still rearing its ugly head. Because black Haitian culture is still considered by so many as something needing help, I am encouraged as a white guy to paint black people and record hip hop music and study voodoo culture and still be seen to be helping the poor black Haitians through it all. I cannot be seen as simply appreciating the beauty and the power and the message within those cultural mediums, I have to be seen as helping in order to make it legitimate. I am not allowed to really feel a part of them but have to be seen as lifting them up from the outside because that is what the “white man’s burden” is. But African Americans still maintain their dignity enough to a point where a white person appreciating their culture is seen as the opposite of helping. A white person immersing themselves in African American culture is an unwelcome slap in the face. All of the good work that Dolezal has done, which the NAACP continues to stand by, gets criticized because of an underlying understanding that African Americans are still Americans and we don’t share our identities with anyone unless we can impose them upon them.

So the real difference and the real offense in Dolezal’s story comes down to the fact that she lied about it. And this brings me back to the term transracial. It makes me wonder if much like in gender identities and sexual orientation identities and religious identities, maybe we need to start allowing some space for a grey area when it comes to racial identity. Because I have a feeling that if Rachel Dolezal was ever given the freedom to consider herself transracial from the start, she wouldn’t have ever had to lie about being black. She could have openly identified as a women born with Caucasian skin, but identifying within her spirit much more strongly with black culture. She would not have had to reject her family or build such an elaborate fairy tale. But because that option was never given to her and because even now that option is being discredited as nonsense, she felt like she had to go to the extreme lengths that she did in order to live the life that felt most natural to her. And in that sense, I have to defend her right to live that life. I have a feeling that given the option, there are more people than we realize who might truly identify as transracial throughout history. There are certainly examples of others changing their race not for survival but simply because they want to feel more themselves. This certainly is not said to discount the histories of the many people who have had to pose as different races for their safety and freedom, their trials should be remembered and celebrated as truly contributing to the progress of civil rights. But to me, Dolezal’s story is much more one of individual rights, one that I, and I think many others, can sympathize with on some level. It’s true that she can never know what it’s like to have grown up black and endured the discrimination and overcome the obstacles that come with that. But it’s also true that her wanting to be part of the present and future struggles of that group by making herself culturally, spiritually, and even physically a part of that group didn’t hurt anyone. So why can’t there be a space allowed for her and others like her to feel welcome to express their identity how they want?

So I’m not going to say that this is or isn’t racism or that transracial is or isn’t a thing because I believe that those who’ve experienced racism are the ones who get to define what it is. However, if I was ever offered the option to identify as transracial, would I? I can’t say for sure. I typically don’t like labels of any kind for any reason and I prefer to perceive people according to their deepest parts rather than their outside parts. But in this case, I can guarantee you that I’d be tempted. I would be tempted to get comfortable in that identifiable grey area.

So tell me what you think. I know I’ve got readers of all races on this blog. Is Rachel Dolezal delusional or brave? An insult or encouragement? Offensive or misunderstood? Or something in between that we as a society aren’t quite ready to recognize yet? Are there any parts of her story that you can relate to?