There are so many reasons why I despise reading the death tolls trackers in the news now, after Hurricane Matthew, but anytime that a disaster hits Haiti. And since I can’t be in Haiti right now to distract myself from the news by engaging in concrete action to help those who are still living, I’m just going to use my blog right now to vent about some of those reasons why death tolls have become meaningless to me.

First of all, let’s make no mistake about it, the truth is ZERO Haitians have died as a result of Hurricane Matthew. Allow me to repeat that, zero Haitians have died as a result of Hurricane Matthew. The hundreds that you are hearing about in the news have died from inescapable poverty, homelessness, deplorable infrastructure, the incompetency of nonprofits, the government, and social institutions, and the terminal disease of international apathy. When someone dies of cancer, but the final thing that made their heart stop beating was an infection, we don’t say they died of an infection, we say they died of cancer. In Haiti this week, Hurricane Matthew may have been the killer, but he was not the cause of the deaths. In Haiti this week, hundreds of people lost their lifelong battles with poverty during a hurricane. That should be what the headlines read. Because long before Hurricane Matthew made landfall on Monday, every single one of those human beings that are being counted in the death tolls were already victims. They were already waking up every day unsure if they would see the next and praising God when they would see the next because each day is a miracle when facing the deluge of impossible systemic obstacles that are heaped on the average Haitian by history and by today’s global society. In saying this, I am not suggesting that every day is a depressing mire of hopelessness for Haitians, I am pointing out that every day every Haitian has a tremendous battle to overcome and most days they are able to do so with dignity, strength, and unshakable resistance. On one day this week, however, hundreds of Haitians lost that battle with the final blow coming from the deadly storm that has captured the world’s attention when the other daily injustices cannot.

Secondly, People are not numbers! Anytime we reduce a human being to a number we automatically destroy our potential to empathize. The latest number that I heard before writing this was 330. But to those who loved each one of those victims, they are not one of 330. They are one. Period. They are one father, one mother, one child, one soulmate, one role model, one best friend. They are one individual human being that possessed beauty, and talent, and spirit, and dreams. Diminishing those individuals to some tally mark on a spreadsheet or statistic in a news report adds one more additional grotesque insult to their already tragic loss. But categorizing Haitians in this way, according to what disaster killed them, or what injustice they are victims of, is largely what has fed the international apathy that has put them in such a situation that makes them vulnerable to a hurricane like Matthew in the first place. Haitians are seldom, if ever, portrayed as real human beings with real human qualities. They are “the poorest people in the Western Hemisphere”. They are the ones that “still struggle to rebuild after the devastating earthquake of 2010”. They are “tree eaters and mud cookie consumers”. They “live on less than a dollar a day” and “live under a corrupt and dysfunctional political system”. They are the 330 that died in Hurricane Matthew, the 10,000 that have died from Cholera, and the 300,000 that died during the earthquake.  And as long as non-Haitians are allowed to control the narrative, that is all that they will continue to be defined as. 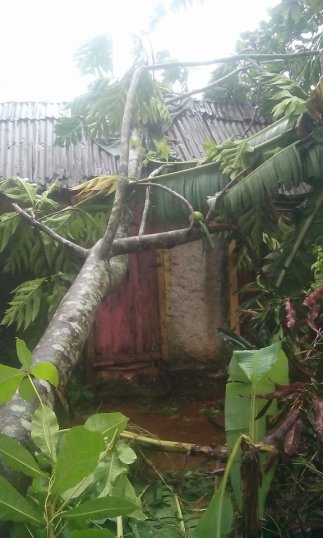 And let’s be honest, Numbers don’t really mean anything. It could be 330, it could be 300,000, it could be one bagillion. The death toll rising or changing should not be our sympathy barometer. What number does the death toll have to get to before you take action? Are you calculating your donation proportionate to the death toll? What’s the tipping point that the total has to get to to make you care? Heaping the total onto Hurricane Matthew allows us to ignore the role we each have played in creating the system that has made each one of those victims vulnerable in the first place. But if we each acknowledged our own complicity in creating that system, then even one death should be too many. When every day hundreds die of preventable causes the result of a failed system and we don’t take action to create a change, then why all of a sudden do we pretend that the 33o attributed to Matthew will make a difference? There are many people working everyday to do good work to change that system and bend the trajectory of the toll that will be taken by future disasters, many of them Haitian themselves, struggling to get their voices heard because of the categories that they’ve been predetermined to belong to. Those of us non-Haitians who work by their side day in and day out try to get their voices amplified but no one listens unless a disaster comes along to slap people in the face with an unsettling death toll. This isn’t the first time a tragic death toll has come out of Haiti, but the system continues unchanged, so you can’t blame us for being a bit cynical about whether those numbers mean anything.

The numbers, just like the people they represent, will be misused and exploited. We who are responsible for raising money for both the relief efforts as well as the ongoing sustained grassroots programming will go to great lengths to get the funds we need to do the work that needs done. The good ones out there will do so with images and stories that maintain the dignity of the victims but unfortunately there are plenty out there that will use the increase in attention and sympathy to perpetuate victimization, expand the divide between “us” and the “others”, and allow dependency to grow. There are also others who will use inaccurate images and stories to get money for completely different purposes. And all of that dilutes the trust that some of us work so hard to build when working in Haiti and with Haitians. But please don’t use the exploitation of a few as an excuse to not support any. Find an organization that you can trust, that you can keep in direct contact with, that works with local staff and volunteers and community leaders to accomplish the work in the most effective way possible.

I’m in one of those uncomfortable positions right now where I have to raise money because our community needs help and I have access to people who can financially provide for that help, but I am also aware of the distrust and compassion fatigue that exists. So in the process of fundraising I’m trying to do so in a way that seeks to accomplish clear, defined, realistic goals that match the capacity of the local organizations that I work with that are on the ground and ready get to work. I am hoping that that approach resonates with people who have been inspired to get involved in specific action but aren’t trying to change the world. If that resonates with you, please check out our efforts through the Mountaintop Baz and LaVallee de Demain and make a donation if you can. But don’t donate if you’re just trying to absolve the pity you feel from the news stories. Donate if you are willing to see, truly see the people affected by this and if you want to be a part of a sustained effort to change the system that fueled the vulnerability in the first place. If you are looking to just absolve your pity, then go ahead and donate to the Red Cross. A lot of people out there would tell you not to do that, but I’m telling you, if you want an easy. one time, feel-good place to donate that isn’t going to ask anything of you in the future go ahead and throw your money their way. They do do a lot of good work, despite what many people would want you to think based on that article about them only building 6 houses after the earthquake, which is extremely inaccurate and doesn’t help progress in the bigger picture. I know a lot of Haitian friends, dozens that I know personally, who are in houses built by the Red Cross, and many more who have been employed by their ongoing health programs. Of course, I’d rather have you donate to the organizations that I mentioned or one of the many other smaller, locally led, grassroots, long-term organizations that are already active in the areas. But I want your donations to have meat behind them with sincere empathy and understanding of the bigger picture beyond this single disaster. That may sound like a lot to ask, but a $10 donation out of empathy is much more valuable than any amount donated out of pity. And if I’ve said it once, I’ll say it a million times, every little bit helps. You’re thoughts and prayers and social media attention are truly all appreciated, but prayers and shares don’t rebuild roofs. So give what you can with your whole heart, but also with your mind.

And let’s all remember that this is not the last time that disaster will strike Haiti, but next time that it does, if we are able to to focus more on the people and not the numbers the people themselves will be be empowered to build the system that works for them in the future. Until then, I truly do appreciate every thought, prayer, and good vibe sent in the direction of Southern Haiti in earnest solidarity. As the eastern US faces Matthew in their own way now, although with a different set of circumstances, our prayers will be with those affected there as well.